One of the biggest selling points for the Amara development by Ayala Land in Cebu is the location. This a tranquil, sea side neighborhood that has everything you could ask for in a waterfront community. Barangay Catarman in Liloan, where the Amara development is, is bordered by the Camotes Sea coastline on both the north and east. Meanwhile, it sits on a jutting portion of eastern Cebu Island.

This residential community is roughly 3 kilometers located southeast of the municipal town proper in Liloan. From Cebu City, you must travel 18 kilometers north. But if you travel via the newly opened Cansaga Bridge, the total travel time from Cebu City proper to Amara is more or less 20 minutes. This makes the residential development secluded but still highly accessible. The famed Bagacay Lighthouse is located on the eastern coastline and right next to the Amara development. Hence, this provides an idyllic touch to a seaside development that offers stunning views of the beach.

Liloan in Cebu is a first income class municipality with a population of over 118,000. The name for this town was derived from a spot known as “Silot” along the coastline. This spot is responsible for the formation of a whirlpool that is formed due to how the water ebbs and flows on the bay. In Cebuano term, this phenomenon is called “lilo”. Hence, the town has been given the name “Lilo-an”, which means the place where the lilo forms.

Liloan was once part of the municipality of Mandaue until it was established as its own parish in 1845. Nowadays, there are 14 barangays that comprise Liloan. Barangay Catarman, where Amara is being developed in, is the second most populated out of all 14 barangays. It also has the second highest growth rate in terms of population from 2010 to 2015. Barangay Yati is the most populated barangay in Liloan.

The historic 100-year old lighthouse at Bagacay Point is one of the most important landmarks in Liloan. The Spaniards built this lighthouse in 1857. This 22-meter lighthouse is still being used today, mostly for harnessing solar energy. It is also a National Historic Landmark after being declared by the National Historic Commission of the Philippines in 2004. Hence, the proximity of the lighthouse to Amara development in Cebu creates a beautiful backdrop in this modern development. Aside from the beautiful seaside location, the touch of history provides an interesting detail for the residents of this residential community.

Aside from the lighthouse, there are other notable landmarks in Liloan such as the Liloan Church (formerly the San Fernando Rey Parish Church). This church was also built in the mid-19th century. Meanwhile, locals also love to visit the local market just outside the church especially after every mass. There are plenty of local delicacies that can be enjoyed at the market. Rosquillos is one of these popular delicacies, but so are otap, mamon, and monay. The historic allure and simple way of life combine to making life in this area ideal for families and retirees. 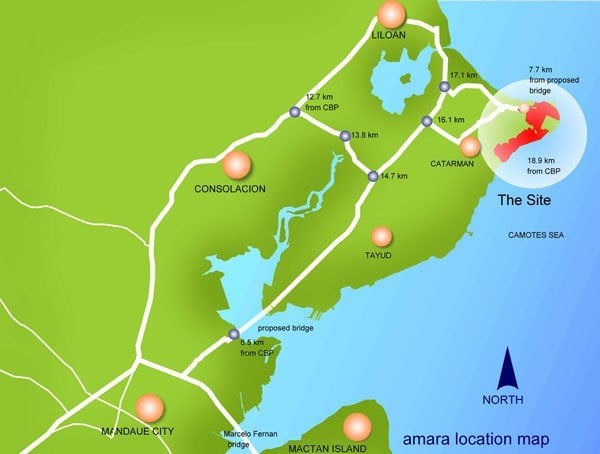